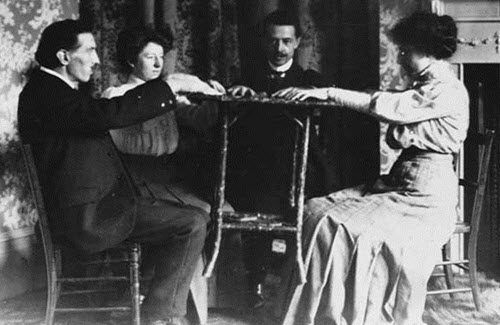 Many of us have heard of Ouija boards, Tarot cards, crystal balls, and other tools for divinity. The prevalence in the United States has intensified with popular movies, books, and television shows which showcase otherworldly events. While we have become so used to these devices being a part of our consciousness it is hard to think of a time when they did not exist. Wondering how these psychic apparatuses came into popular culture can lead down a few different paths: some may say that P.T. Barnum was the first to introduce “mediums” to popular culture, and others say that the Spiritualism movement became popular because of the American population’s deep need to contact loved ones who died during the course of the Civil War. 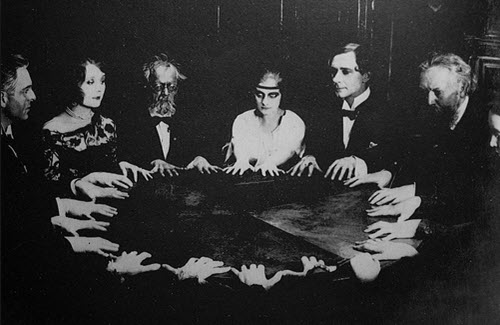 Both of these answers are correct, but the origin of the Spiritualism movement can be traced to three sister in Upstate New York, who managed to convince the entire nation that they had the ability to talk to those on “the other side.” These women are known as the Fox sisters, and their story begins in March of 1848. 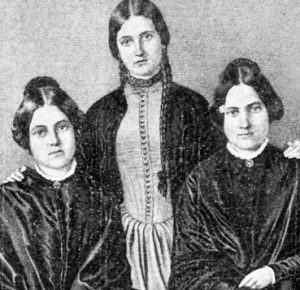 When the three Fox sisters—Margaretta, Leah, and Kate—moved into their small home in Hydesville, New York, they were soon greeted by what they described as a “rapping” upon the cabin walls. The sisters alerted their parents about what they heard, then showed the older Fox’s the room where they first heard the sounds. As Mrs. Fox later told reporters interested in the girl’s story, she heard the same knocks on the door. As she listened, she was aware that the knocks were answers to questions from the Fox sisters.

Mrs. Fox began to ask the apparition questions, and she found that the spirit was a man who had been killed in their house when he was 31 years old. Through a series of knocks the Fox’s had learned that the body of the spirit was buried in their cellar. The Fox’s called their neighbors in order to see if these raps were audible to others. According to reports, they were, and the same questions were asked of the spirit several times with the same answers given each time. 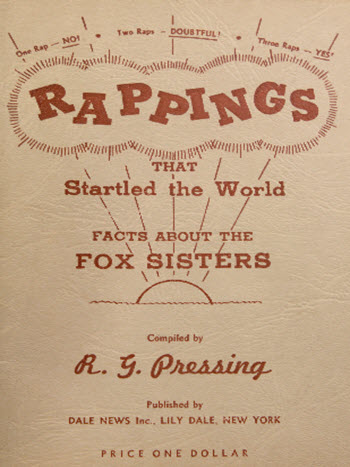 The news of the Fox sister’s spirit communication were heard far and wide, most notably by the famous P.T. Barnum. Barnum had become known for hosting a variety of acts in his show—most famously “freaks,” or disfigured humans, whom he paraded as spectacles for his crowd’s amusement. When he heard about the Fox sisters he invited them to travel with him. They decided it best not to travel with the circus, but they did let Barnum attend one of their séances. After a show like the one the Fox sisters had performed, Barnum spread the word about their act, and many replications of the sister’s performances were made popular (though Barnum later denounced his belief in the Fox sister’s ability to communicate with the dead, stating that he did admire their showmanship).

Much like Barnum, the sisters realized the need for spectacle. They would hold each other’s hands around a table, light candles, and begin to ask spirits questions. Sometimes they would go into trances and others they would be coherent and able to answer questions; sometimes they only heard the spirit through a whisper; but they always allowed viewers to get the sense that they were seeing something magical, and indeed, real. 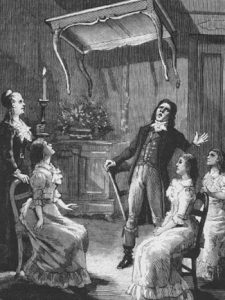 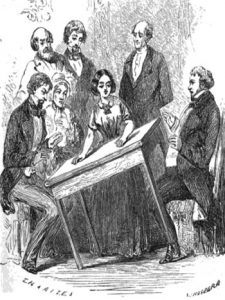 Many historians have recovered conflicting accounts from witnesses of the sister’s power, but there was one piece of evidence that would prove their skill set to be credible: in November of 1904, the Boston Journal reported that the skeleton of a man had been discovered in the cellar between the walls of the house, not under the cellar floor as the sister’s had reported. The person who owned the house at the time, William H. Hyde, was not a relative of the Fox’s, therefore he decided to send information to their extended family to let them know the sisters had been right about the location of the body, just not the exact spot. This information confirms the Fox’s claims to communicate with spirits, but there will always be skeptics who do not believe.

Although the Fox sisters have long since passed, their legacy and talents created a movement which was what the American public needed at the time. And one that has continued to this day, when so many of our questions about the “other side” go unanswered.