How you express anger based on your zodiac pt 1

You are here: Home / blogs / How you express anger based on your zodiac pt 1

Emotions and frustrations are running high this month. Understanding how you express anger can help you learn to better manage your reactions, and avoid unwanted results from you moment of Hulk smashing out. It is important to remember that emotions are part of being human, and should be felt and expressed. However there are proper ways to handle yourself in every situation, especially when you’re fuming at the ears. 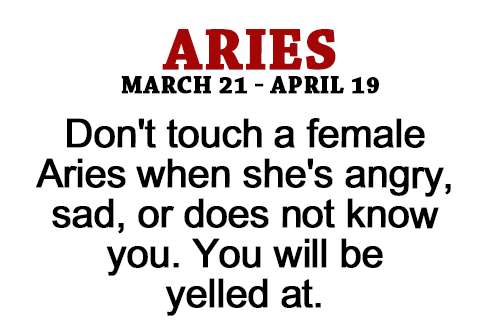 Aries – Anger, rashness, and bouts of temper are the dark side of anyone burn under Aries. When an Aries gets angry they are like a bat out of hell. An Aries can and will explode as soon as they are triggered with no warning and no regard to themselves or anyone else in their general vicinity. 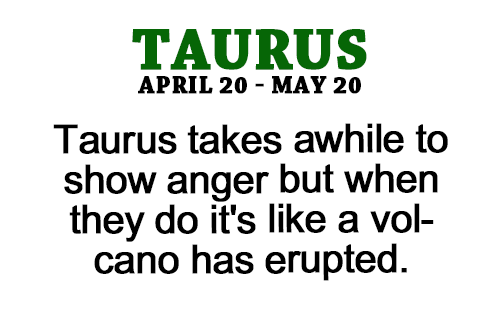 Taurus – Taurus take time to push to the breaking point. Typically when angry they become silent and dismissive, this is a warning sign, back off now. If you continue to push a Taurus past the stone face and icy response they will explode. The calm before the storm will vanish in an instant the grimace will become a full-fledged hurricane. All of the emotions they contained will break free at once. A Taurus will cry, shout, and throw things until they have total drained themselves.

Gemini – Geminis will try vigorously to hold onto their level head, but they will not tolerate idiocy. When angry a Gemini will resort to throwing words, often very large words, that will express their rage in the most hurtful of ways. A Gemini will argue aggressively, with no regard for the opinions of others until they have calmed down. 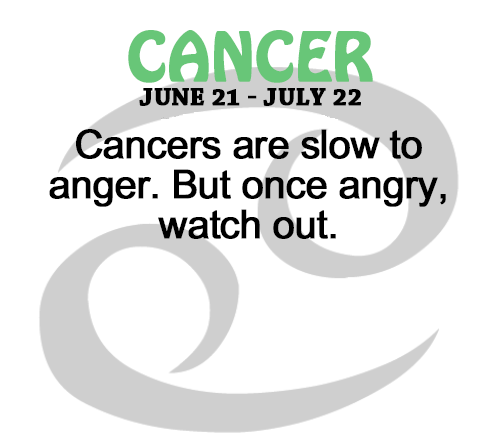 Cancer – A cancer can be quite and calm, but upsetting them will cause their stead waters to roil into a tusinami. The first sign of a cancers anger is when they begin to sulk. If they are not calmed at this point a cancer will become passive-aggressive. If a cancer is pushed past this point get out before it’s to late. When a cancer breaks all hell breaks loose, their words become daggers hitting exactly the points that hurt the most. The will remind you of every wrong you have ever done and then some. 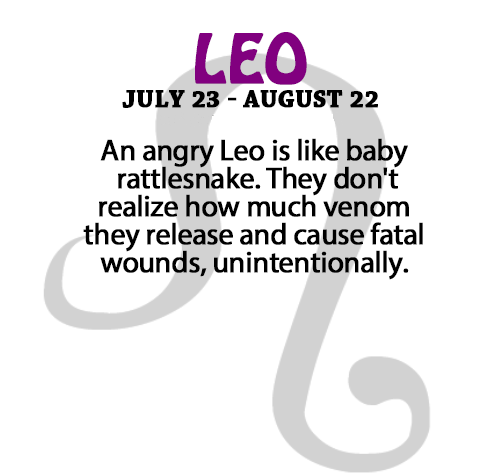 Leo – When a Leo is angered the claws come out but often their roar is much worse. Leos will compound all other issues in their life into the outburst that accompanies their anger. It does not take much to anger a Leo, however their rage is just as short as their fuse. They will argue with you and shake your confidence and they will rarely apologize, however they are quick to forgive especially with loved ones. 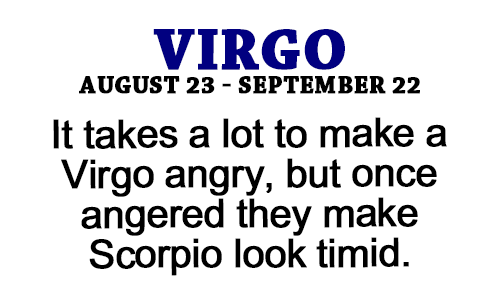 Virgo – It is very rare for a Virgo to actually get angry. They tend to hold in their anger only expressing annoyance. However if a Virgo gets pushed so far that they can no longer hold it in there’s no holds barred.

Libra – Libras are the slowest to anger of any of the zodiacs. However if you push a Libra to their breaking point they will go from sugar and spice and everything nice to hostile, ruthless, and aggressive in a rapid succession. For as long as it takes for their temper to boil over the fall out is unparalleled by any other sign.

0Astrology: The Mythology of PiscesThe 6 Types of Psychic Abilities