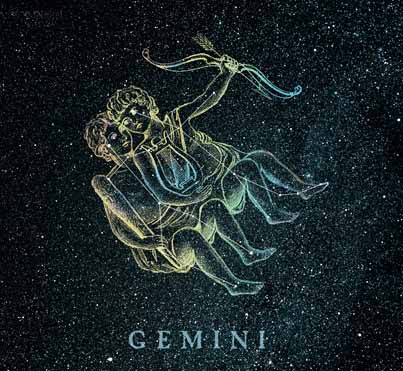 The mythology of Gemini centers around twin brothers Castor and Pollux. That sounds simple enough. Not so fast…

These twin brothers had the same mother but two different fathers. Really, you ask?

Here’s how the myth goes… One night Leda, their mother, was made pregnant by both Zeus, in the form of a swan and her husband, King Tyndarus of Sparta.

They eventually became Argonauts and went on the search with Jason for the Golden Fleece.

They also fought in the Trojan War. In this war they had to rescue their sister Helen who was kidnapped by their arch enemy, Theseus of Athens.

This is where Castor was killed. Pollux became so sad that he asked his father, Zeus to make him mortal so he could be with Castor some day.  Zeus did just that making them principal stars not just part of a constellation. When you are given a gift by a god there are always stings attached. This was true for Castor and Pollux. They would switch from light to darkness for all eternity. They would have a day on Mt. Olympus, followed by a day in Hades otherwise known as Hell! Thanks Dad!!!

Next Blog: Mythology of Cancer