Ready for a real ghost story? 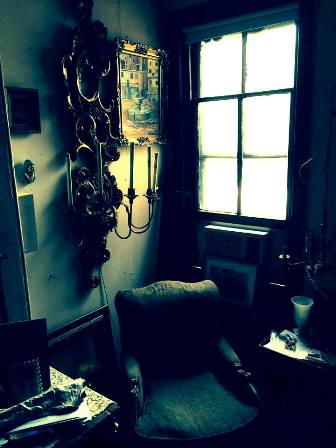 Moving back east after a decade spent in California was quite a change. Up here we’ve got all four seasons and the cities are much older than those in the golden state, so it was no surprise that I would in fact move into a haunted house. I rented a room in a stately old brownstone from friends, a couple, who lived in the sprawling house. To be honest, it even looked like a haunted house; Miss Havisham-esque could describe the crumbling grandeur of such a house whose fourteen foot ceilings, peeling wallpaper, and marble mantles topped by massive gilt mirrors that had somehow withstood the test and trials of time.

My quarters were on the second floor in a large bedroom adjacent to the master bedroom. Sparsely furnished with just a bed, two tables, and a mirror topped dresser it was a somewhat dismal room complete with cracks in the plaster, holes in the ceiling from past water damage that had never been patched even though the leaks were gone, and a single bulb hanging from the ceiling. I liked it immediately, and the price was right to boot! I would give the space some character with my bits of wreckage (four post bed frame, settee, reading chair, lamps, and art) I had very little and the rest was just put in storage. A few months passed as I settled in, getting to know the big old place, with all its idiosyncrasies such as locks that needed wrangling and creaking stair treads; the usual…

What wasn’t usual was the house and what lurked in its shadowy corners, dusty shuttered rooms that were never used, and the things that go bump in the night. I had grown up in house even older than the address I had made my home, so I understood that a number of factors might spook an individual unfamiliar to a decaying old edifice. My housemates had informed me of the strange goings on in the rambling old brownstone. If I were to experience anything it wouldn’t have come as a surprise.

A month or so passed when I began waking at exactly 3:00 AM every night. Sensing I was not alone in the room was not the problem, it was the sensation of being watched (not watched over, just watched). The pattern continued with an unintended wake-up call at 3:00 AM followed by a few more hours of slumber. Late in the summer as the first hints of the coming fall sent a cooler breeze through the window of my quarters I once again awoke at the appointed hour. Having a habit of sleeping on my side my eyes opened adjusting to the darkness. Tonight though would be different.

Not three feet from where I rested, illuminated by moonlight, was a figure bent over my night table whose head was almost level with mine but turned away so all I could see was a coil of dark hair. She wore an aubergine or rust coloured satin dress with a high collar trimmed in glittering jet beads at the neck and shoulders. The back of which gathered in a slight bustle.

I could make all of this out, even turning my eyes towards the rest of the room to make sure I was seeing clearly. When my gaze returned to the woman who appeared to be searching for something by my bedside turned her head to face me. It was blank, where there should have been a face was a murky, cloudy shadow. I closed my eyes at this point mentally telling the apparition that “I do not want to see you right now” until the sensation of not being alone subsided and I drifted off again.

On a side note, I have worked as a historical costumer and have a deep appreciation for architecture. The figure’s gown would be fitting for the house… right down to the details such as the jet beads; the woman very well could have resided in the grand house, which was obviously built for a wife or daughter considering the abundance of details within. Upon inspection of the bedroom one might also note the size, original closets, and its proximity to the master bedroom with connecting door. Further inspection of the door revealed a waist high set of slats on either side of the door jamb (here a mother could install a baby gate to keep watch over a toddler in the room). Perhaps what she might have been doing by my bedside was taking care of a child she may have lost? She did exude a sorrowful aura.

I never saw the woman in my room again, yet her presence was still felt; perhaps she got used to me.